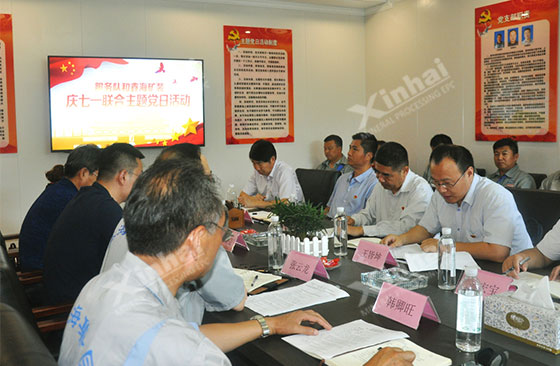 (The scene of the July 1st joint theme activity)

Under the auspices of Mr. Xiangdong Zhang, the provincial audit office administrative business audit two deputy director, the members watched the party building feature film, Road to Yi Jia Village, to learn the excellent quality of fearless of danger and quality and dare to struggle, and contribution spirit of party founded for public interests and loyalty for the people from the film. 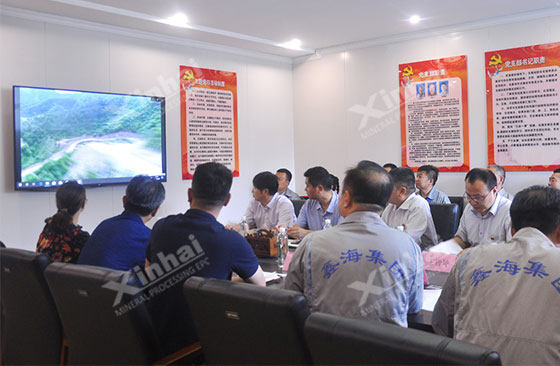 After watching the film, Mr Qingwang Han, the administration operation manager of Xinhai Mining, led members went over the party oath, recalling the solemn promise and determination to struggle, reviewing the growth process of their political life, and stimulating members that never forget your original intention to join the party and keep in mind the mission of party members. 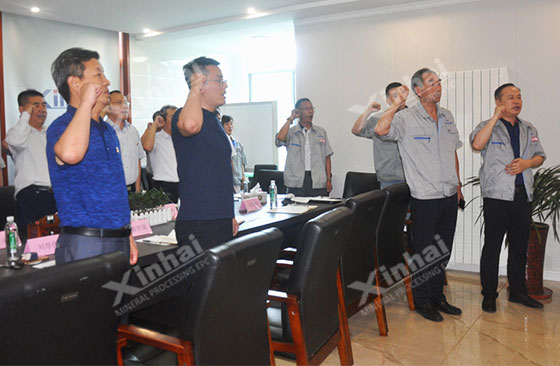 (Going over the party oath) 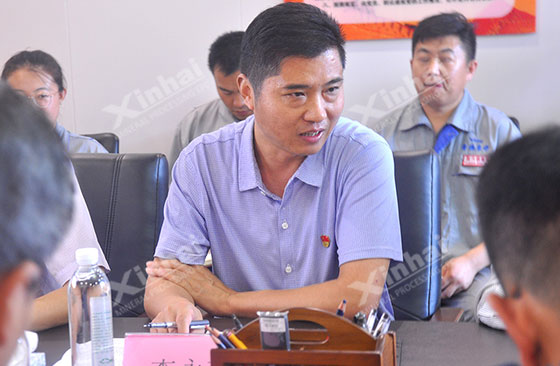 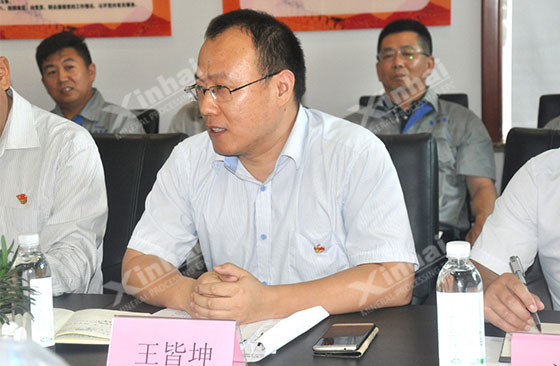 Nine years ago, I joined the communist party of China with honor. Looking back over the past 98 years, our party has maintained its vigor and vitality from small to large and from weak to strong and led the Chinese people to make great achievements in revolution and construction. In ordinary life and work, some people have such an image of the interpretation of the communist party members: usually can see, difficulties can stand out, a crisis can throw out. As a communist party member, I feel very proud, proud. When I was young, I liked to listen to the stories of the past told by my elders. At that time, the party in my mind is composed of a story and a hero. On December 28, 2010, when I joined the communist party of China on my 29th birthday, I felt that my life had become more important. From that day on, I then secretly make up my mind, with the party member's standard, in the future work life study strict request oneself, earnestly does a qualified party member! 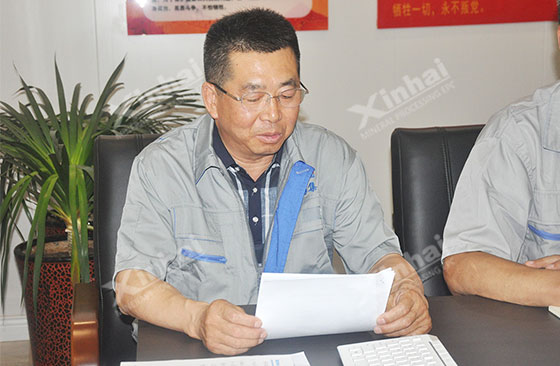 On January 1, 1986, I joined the communist party of China. Since joining the party 33 years ago, I am proud of being a party member, but also feel their obligations as a party member must fulfill, in work, study and social life play a good vanguard role, honest person, solid work, obey the organization distribution, actively complete the tasks assigned by the party organization. The party day activities, deepened my understanding of private enterprises to carry out the party building work, realize that in private enterprises to carry out the party building work, to integrate enterprise development, with production, management, innovation and other combination, to develop excellent staff into the party members, give full play to the vanguard role of party members, with the point belt. Before graduating from university in 1999, I joined the communist party of China with honor. During college, I actively approached the party organization and eventually became a communist party member. After graduation, I joined Xinhai and worked for 20 years. Starting from technical skills, I helped my colleagues to discuss projects, select factory sites, design, and lead workers to install and debug on site. Where there is a need, I will go, the full development of the communist "screw" spirit, leading by example. Just as the saying goes, happiness comes from struggle. Under the new situation, I will be passing on the party's fine style of work, to carry forward the Chinese traditional virtue, the practice of socialist core values, stick to the spirit of the communists highlands, consciously in order to implement the new era, the party's historical mission, unremitting struggle in power Xinhai Mining in the process of growing, give full play to the role of party member's fighting forts, always keep their feet on the ground and pioneering spirit, to play a good communist party member's cutting edge exemplary role. 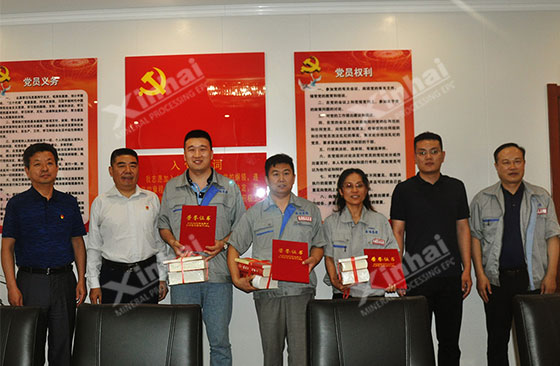 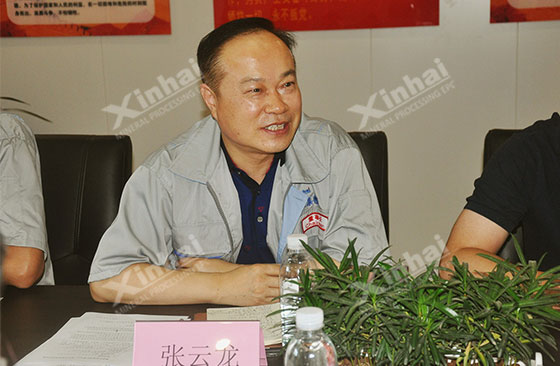 Chairman Mr Yun-long zhang mentioned at the meeting, since 1997, the beginning and occupy the first onto the road of mining engineering "one-stop" services, to assess the situation in 2012, actively to carry on the transformation and upgrading, to expand chose its own factory in 2019 to set the "design and research services - complete sets of equipment manufacturing and purchasing - commission and delivery - mining operation and management" as one of the "mineral processing EPC + M + O service", Xinhai Mining all the way with the national development strategy of "going out", positive response "area" initiative, involved in the overseas market, aim at "Internet +" trend, Exploring new market development space, successfully listing on the new third board, adhering to the spirit of innovation, pioneering and enterprising, and actively exploring its own transformation and upgrading development path, the enterprise has entered the rapid development stage and is realizing the "Xinhai dream" step by step. (Xinhai Mining went to the nursing house for comfort)

At the same time, we know that, as an enterprise with responsibility, we shouldn't only pursue economy efficiency, but also carry out society duties. For this, Xinhai Mining responds to the party and government, participates in charity activity actively and rewarding the society, contributing to building a harmonious society. Xinhai Mining went to the nursing house for comforting and organized charity donation campaigns and so on, supporting and joining charity activities. Xinhai Mining is trying carrying out socialist core values and insisting to be a business with temperature. 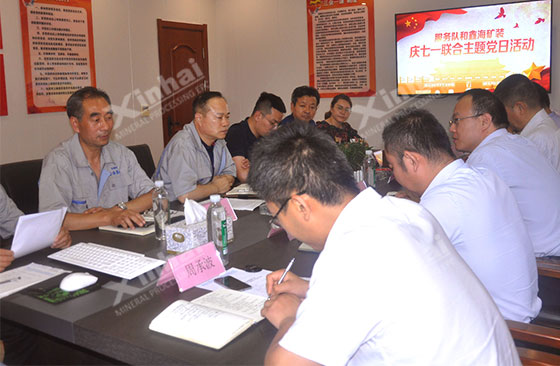 This July 1st joint theme party day activity enriched the activity form of party member education, exercised the party spirit consciousness, lifting ideological level. Here, all the members of Xinhai Mining express that, we will thoroughly study and implement the spirit of the 19th CPC national congress and Xi Jinping thought on socialism with Chinese characteristics for a new era. We will stay true to our original aspiration, forge ahead and bear in mind our mission. We will hold the service concept, what you need is what we can do, and bring each mine one-step customized mineral processing EPC+M+O service, wholeheartedly for each customer to create rich benefits of modern mining enterprises!

How to Improve the Thickening Effect of Thickener?

How to Separate Lead and Zinc Ores on Earth?