What Are the Quartz Mineral Processes?

Quartz stone, also known as silica sand, is a common non-metallic material, which can be made into high-purity quartz sand after separation and purification, widely used in glass, ceramics, metallurgy, casting and refractories and other industries. So, what are the common quartz mineral processes at present?

01One. The common quartz mineral processes

The grade of SiO2 in the quartz stone is reduced with the thinner of quartz grain size, while the grade of mineral impurities (such as iron and aluminum impurities) is increased, this kind of phenomenon is especially obvious in the quartz stone containing a lot of the clay minerals. Therefore, the spiral washing machine, drum sieve, hydrocyclone, desliming bucket and hydraulic classifier are often used to the water concentration of quartz stone, it is very necessary to carry out the classification and desliming in the quartz processing plant. As a pretreatment method before the ore separation, the washing, classifying and desliming are applied earlier and widely in the quartz washing plant, but this quartz mineral process doesn't have the obvious removal effect for the thin-film iron and adhesive impurity minerals on the surface of quartz stone. 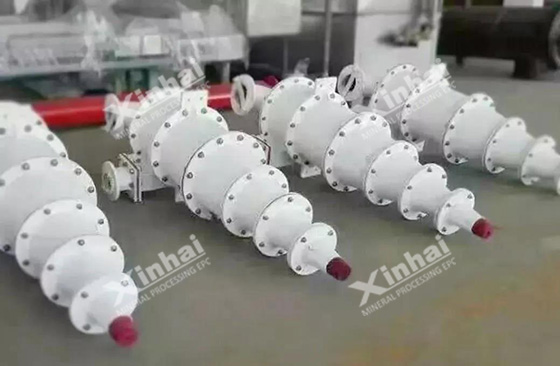 Scrubbing process is mainly to remove the thin film iron, bond and muddy impurity mineral on the surface of quartz stone with the help of mechanical force and the grinding force among sand particles, and further wipe up the non-monolithic mineral aggregation, and then achieve the further quartz processing effect through the classification operation. 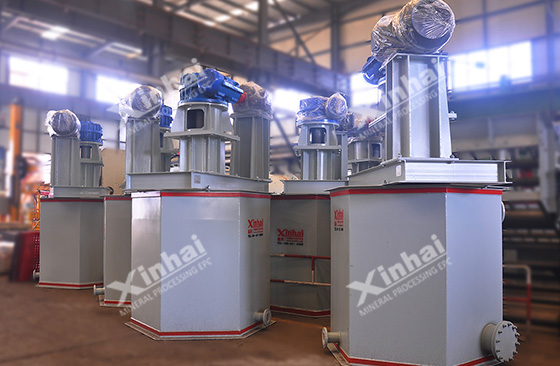 The study shows that the scrubbing concentration of quartz stone shall be between 50% and 60%, but it also increases the difficulty of quartz processing to some extent. In principle, the scrubbing time shall be based on the requirements of preliminary product quality, not too long. Too long scrubbing time will increase the equipment wear, improve energy consumption, and increase the cost of beneficiation. For some quartz minerals, the mechanical scrubbing and wiping effect are not ideal, adding the reagents when necessary can increase the electrical repulsion on the surface of impurity minerals and quartz particles, enhance the separation effect between impurity minerals and quartz particles. 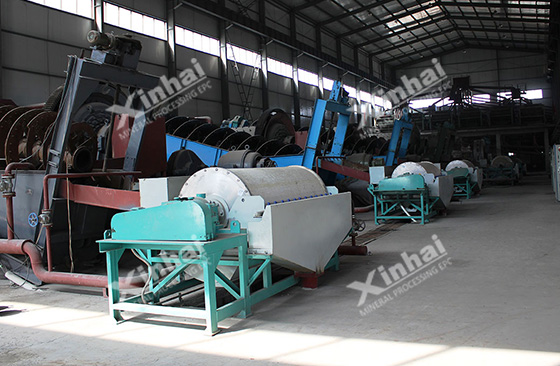 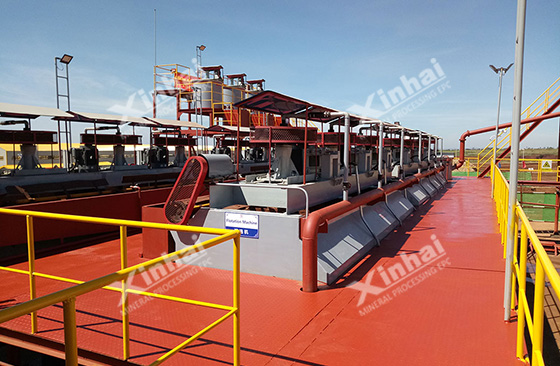 Generally, the purity of quartz can reach 99.3% to 99.9% after scrubbing, desliming, magnetic separation and flotation, which can basically meet the needs of industrial sand.

Because the quartz is insoluble in acid (except HF), while the other impurity minerals can be dissolved in acid, the acid leaching process can be used as the quartz mining process. 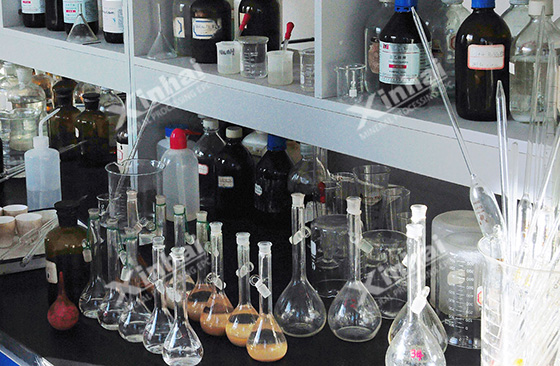 The acids commonly used in the acid leaching process mainly include sulfuric acid, hydrochloric acid, nitric acid and hydrofluoric acid, the reducing agents mainly include sulfurous acid and its salts. The study shows that these acids have a good removal effect on the non-metallic impurities of quartz mineral. But the acid type and concentration have a significant effect on the different metal impurity. Generally, a variety of dilute acid has a significant effect on the removal of Fe and Al, while the relatively concentrated sulfuric acid and aqua regia or HF are often used in the removal of Ti and Cr. The mixed acid composed of the above acids is usually used for the acid leaching removal of impurity minerals. Since the HF has the dissolution effect on the quartz, the HF concentration is generally not more than 10%. In addition to the acid concentration, the acid amount, leaching time, temperature and slurry agitation can also affect the effect of acid leaching effect of quartz. The control of various factors shall be determined based on the final grade requirements of quartz, like reduce the concentration, temperature and dosage of acid as far as possible, decrease the time of acid leaching, so as to realize the quartz processing at a lower cost.

In the weathering sedimentary and mineralization process of quartz sand, a large number of clayey minerals and iron form the cementation or adhesion minerals on the surface of the quartz. It is a common quartz mining process to adopt the scrubbing-classifying- desliming process to remove clay impurity minerals, argillaceous iron, and some thin-film iron. This quartz mineral process is generally used as a pretreatment process before raw ore separation, which can effectively remove the argillaceous impurities. 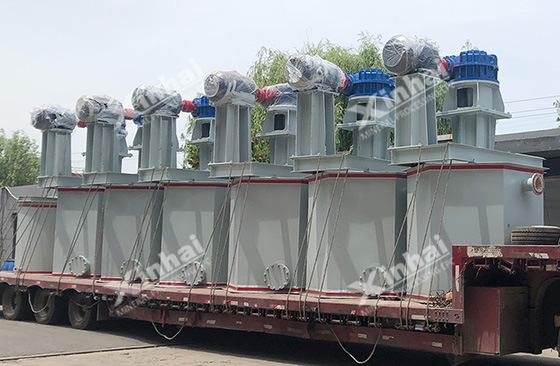 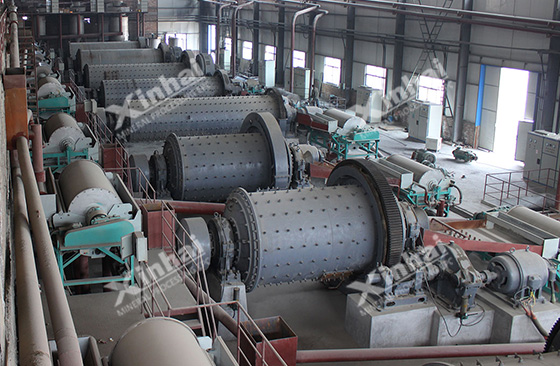 After the washing, magnetic separation and flotation separation of raw ore, the impurity mineral particles with low occurrence (including monomer, aggregate) are basically cleared, the silica purity can generally reach 99.5%-99.9%, basically can meet the majority of industrial requirements of quartz sand. However, in order to obtain the ultra-high purity quartz, the impurities continuously adhere to the surface of quartz particles in the form of spots and inclusions must be treated with acid leaching. The mixed acid leaching with different concentrations and matching must be carried out according to the different requirements of impurity minerals (Fe, AL, Ti, Cr) in the different industries. The high purity quartz with silica content of 99.99% or more can be obtained by the rod milling washing - desliming - magnetic separation - flotation - acid leaching process. 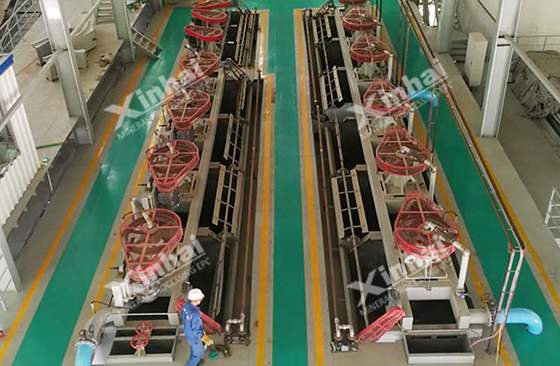 By improving the structure of existing mineral scrubber, optimizing the technical parameters, add reagents for high-efficiency and strong scrubbing – classifying and desliming can remove more than 80% of impurity iron and aluminum ore. The magnetic separation process is mainly to remove the iron-contained impurity minerals. Through this quartz mining process, the high-quality refined quartz sand (silicon dioxide ≥99.8%, iron oxide ≤0.023%, aluminum oxide ≤0.05%, titanium dioxide ≤0.02%) can be obtained, which has reached the requirements of primary optical glass sand, and the yield of fine quartz sand is as high as 73%, while the yield of rod friction washing is only 49%. After further flotation and acid leaching process, the high-purity quartz (silica ≥99.9%, ferric oxide ≤0.005%, aluminum oxide ≤0.05%, titanium dioxide ≤0.02%) can be obtained. This quartz mining process overcomes the shortcomings of secondary contamination of iron caused by rod friction washing and low yield.

These aspects influencing flotation cell effect should not be ignored!